Fifax’s vision is to be a forerunner in large-scale sustainable fish farming with a minimal impact on the environment, so that locally and sustainably produced fish can be enjoyed by its customers all year round.

The production method utilized by Fifax uses filtered water pumped from the Baltic Sea, which is continuously purified and recycled utilizing the RAS method. This method aims to reduce the environmental impact that can cause challenges in the use of more traditional fish farming methods. In this way, Fifax is able to ensure a controlled growth environment for fish in clean water all year round. As a result, Fifax is also able to offer its customers and end product nearly completely free of antibiotics. Fifax’s use of antibiotics in its production is limited to exceptional circumstances.

The end product (adult slaughtered fish), is transported with the help of logistics partners to fish processors and wholesalers in Åland, mainland Finland and Sweden. Customers further process the fish into products suitable for their own customers or sell the fish whole, as fillets, as processed products and ready-made portions for sale to consumers in whole or fillets.

Fifax’s operations cover the full production chain for farmed rainbow trout. Fish are hatched, cultivated, purged and slaughtered under one under one roof at Eckerö production facility. The end product is fish ready for customer deliveries. The full production chain is achieved in an almost closed-loop plant, with limited effect from external factors such as the weather, climate, environmental factors and water disturbances.

The Company expects to achieve its targeted fish stock level of 900 tonnes by the first half of 2022. As a result of achieving a continuous and stable fish stock of 900 tonnes, Fifax would be able to reach the full production capacity of the Eckerö production facility during the first half of 2022. By achieving the full production capacity, it would be possible for Fifax to produce approximately 3,200 tonnes of whole fish to be slaughtered on an annual basis

2. Production-related and commercial benefits of RAS farming of rainbow trout

Land-based RAS farming of the kind conducted by Fifax has certain production efficiency related advantages. As a land-based facility offers more possibilities to optimize the growth environment of the fish through a fine-tuned, largely automated system-operated process, Fifax has the ability to manage the consistent high quality of its product. In addition, the fish grow in a relatively steady and stable manner, and year-round production is more predictable compared to more traditional fish farming methods.

The rainbow trout produced by Fifax is well-suited for land-based farming, and has certain key advantages compared to salmon. Rainbow trout is somewhat less sensitive to changing temperatures and other external conditions, which contributes to a lower mortality rate. Rainbow trout also grows to harvest size at a faster rate, and is likely to have a somewhat better feed conversion ratio. In other words, rainbow trout more efficiently converts feed into the final output of fish meat and at a faster rate, which in turn enables a more efficient production process. In addition, the somewhat higher flexibility with respect to harvest size offers commercial benefits as Fifax is able to utilize market gaps for smaller fish by slaughtering fish in different growth phases in accordance with the wishes and needs of customers. This enables adjusting production to correspond with prevailing demand, to some extent. Besides benefits attributable to the production process, the final product generally has some less fat and more protein than salmon, which is however essentially dependent on the feed provided.

3. Fifax’s growth is supported by megatrends

The growth in sustainable fish production is supported by strong food megatrends. Key drivers shaping the overall food market include:

Fifax continuously applies water treatment procedures to the water in the grow-out tanks in order to maintain the health of the fish. RAS production allows the fish to grow in optimized conditions with total control of the water coming in and going out of the system, while recirculating nearly all of the water used. Parameters for temperatures and oxygen levels can be adjusted at all times to improve the growth and well-being of the fish. The grow-out tanks are constantly monitored for algae and other similar impurities. Any solid matter in the tanks is regularly collected and removed during the process. Land-based fish farming also prevents adverse effects to the wild fish population, which in traditional farming methods can occur.

The RAS method aims to maintain the growth environment of the fish clean and minimize the environmental impact of production. Throughout the entire process, factors affecting the quality of the water in the fish tanks, such as temperature, oxygen and pH values, are continuously monitored and measured. The large masses of water in the grow-out tanks are constantly circulated and purified in the water treatment units, where carbon dioxide and solids such as feces are filtered out of the water, and ammonium converted to nitrate in biofilters. A small part of this flow is released into the sea after it has been treated, and a similar amount of new clean water is pumped from the sea to the facility. Fifax only releases water back into the sea after it has been treated and purified. In addition, in land-based fish farming any waste or by-products from the fish is collected and, to the extent possible, re-used as e.g. fertilizer. This reduces the burden on the surrounding waters. All the electricity needed for Fifax’s operations is produced currently with renewable wind energy.

The location of Fifax’s production facility in the Åland Islands provides close proximity to its current key target markets in Finland and Sweden. Additionally, the short transportation routes result in relatively low transportation emissions. The location contributes to Fifax’s ability to conduct its activities in a sustainable and reliable manner. Fifax also has access to reliable supplies of water and energy. 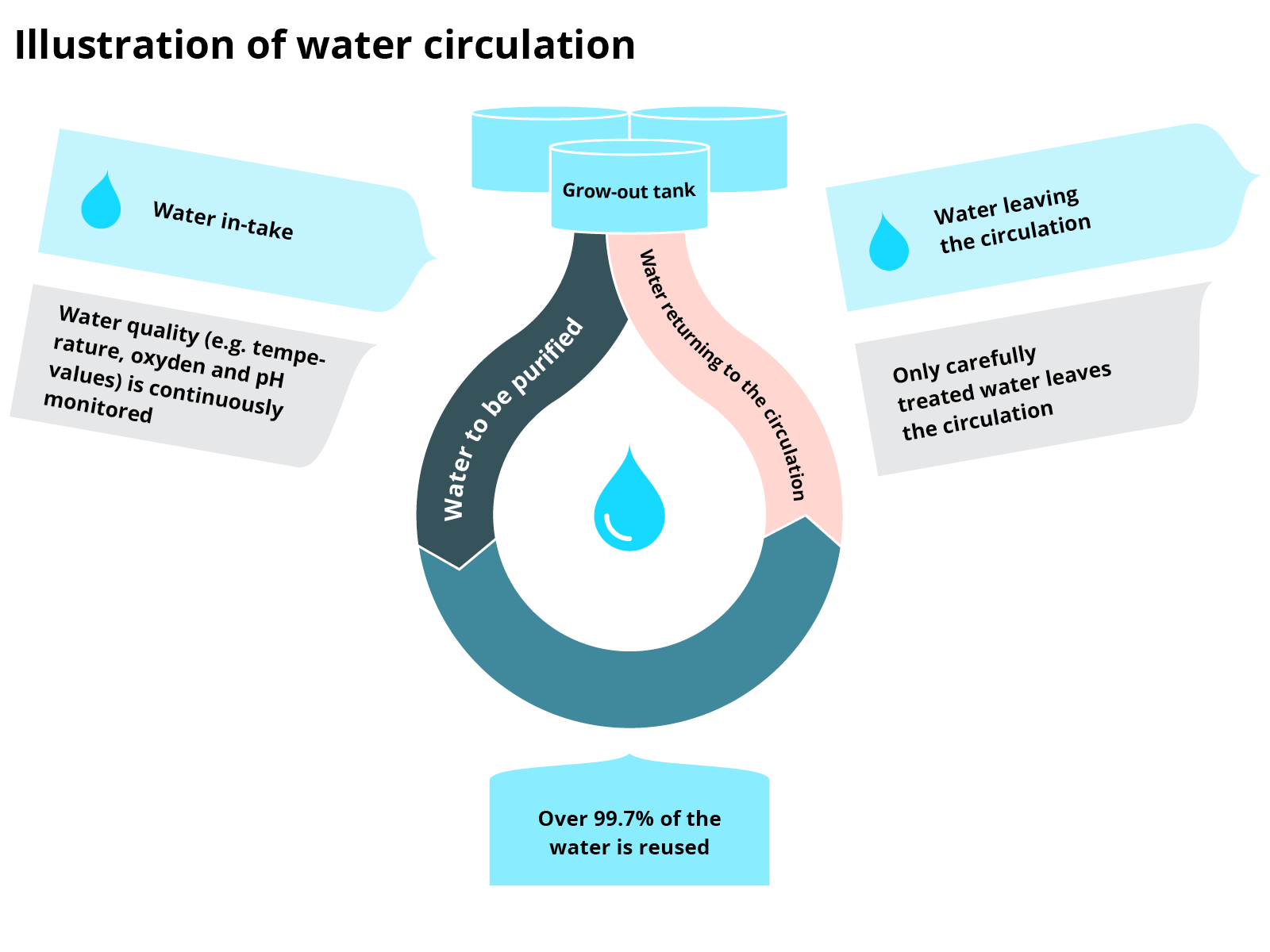 Fish is one of the most sustainable sources of animal-based protein compared to other traditional animal-based sources. Conventional salmon farming causes approximately 20 percent of the carbon footprint and consumes less than one seventh of the water compared to the production of red meat1). Fifax’s management believes there will be increasing pressure to increase the use of more responsible protein sources.

In addition to the waste and emissions, other negative impacts on the environment related to the conventional fish farming may arise from, for example, the use of chemicals, the fish farming’s impact on wild salmon species as well as diseases for example caused by the increased amount of sea lice.

According to the view of Fifax’s management, the Company’s operations also enable supporting several of the UN’s sustainable development goals by promoting healthy living and well-being as part of a healthy diet. Fifax’s focus on sustainable production methods also addresses the need to reduce the carbon footprint and climate impact of animal protein production, and promotes conservation of the seas and the sustainable use of marine resources.

Fifax’s vision is to be a forerunner in large-scale sustainable fish farming with a minimal impact on the environment. Consumers are increasingly aware of the environmental impact of food production, which results in higher demand for sustainably produced sources of protein. Therefore, Fifax is well-positioned to provide an alternative to an increasing amount of consumers looking to minimize any harmful effects of their diets on the environment. This is particularly emphasized in Fifax’s key markets, which are situated around the Baltic Sea.

High-end revenue is derived from restaurants and high-end food stores that offer a premium pricing level. Today, high-end revenue represents a smaller share of Fifax’s total revenue, but is nonetheless important especially for Fifax’s visibility and brand image. Fifax estimates this will bring competitive advantage and opportunities for higher pricing.

Brand-driven revenue is expected to be derived when clearly-positioned and branded products are sold via retail to sustainability and brand-conscious consumers. These consumers are usually prepared to pay a premium price for the products due to a strong brand or sustainability aspects. Fifax strives to increase the proportion of brand-driven revenue from the Company’s total revenue. This emphasizes the importance of Fifax’s brand-building as well as the Company’s ability to focus on addressing an optimal selection of segments and product slots across target markets.

The revenue foundation is in turn built on a stable and recurring high-volume delivery chain in cooperation with Fifax’s wholesaler customers. The potential premium pricing among this customer group would mainly be driven by sustainability and stable supply.

In order to achieve its goals, Fifax intends to actively promote consumer and distributor awareness of Fifax’s products and sustainable fish farming in cooperation with both retail chains and wholesalers, as well as through media promotion.

Land-based fish farming is a growing market, which has attracted significant amounts of growth funding in recent years, and a growing number of investment plans and early-stage construction projects are active globally. However, the required know-how to successfully take a project from construction to production is scarce. Consequently, Fifax has an attractive opportunity to productize the accumulated process know-how and leverage the industry forerunner position in a growing market by commercializing its accumulated know-how, e.g. by establishing a project and technology consultancy business in the land-based fish farming field, which could offer consulting services other companies planning similar production facilities.

As part of its strategy, Fifax intends to make additional investments to boost the efficiency and profitability of its operations. Fifax aims to maximize the value of the side streams generated in its operations and is currently evaluation opportunities to improve its sludge and waste handling technology in order to transfer the currently cost-incurring waste streams to breakeven or potentially even profit, either independently or by utilizing partners.

Fifax also plans additional investments to maximize the production efficiency of Eckerö Production Facility. By leveraging tactical market opportunities, the total production capacity of the production facility could potentially be further increased from the current maximum capacity of 3,200 tonnes. Such market opportunities could be leveraged by slaughtering fish at different stages of growth according to demand, as well as by optimizing production flow according to customers’ wishes and needs. The nominal capacity of the facility is calculated for full-size fish, but Fifax also has the opportunity harvest smaller-sized fish earlier in the process depending on the prevailing demand.

This website uses cookies to improve your experience while you navigate through the website. Out of these, the cookies that are categorized as necessary are stored on your browser as they are essential for the working of basic functionalities of the website. We also use third-party cookies that help us analyze and understand how you use this website. These cookies will be stored in your browser only with your consent. You also have the option to opt-out of these cookies. But opting out of some of these cookies may affect your browsing experience.
Necessary Always Enabled
Necessary cookies are absolutely essential for the website to function properly. This category only includes cookies that ensures basic functionalities and security features of the website. These cookies do not store any personal information.
Non-necessary
Any cookies that may not be particularly necessary for the website to function and is used specifically to collect user personal data via analytics, ads, other embedded contents are termed as non-necessary cookies. It is mandatory to procure user consent prior to running these cookies on your website.
SAVE & ACCEPT